Long time coming, but the old wooden rig has now been replaced with a fully adjustable ali rig!. This thing is rigid! Gives me a level of setup I never had before. Beautifully packed. Really good manual. Lap times are already more consistent.

This is a beautifully made piece of equipment that sits with pride on my rig. It has a very solid feel to it, as though it was built to last, and I have given it a good workout over the past few months. I still tend to drive using the paddle shifters, but when I jump in something classic like an old Lotus, I swap over to this shifter and it is a lot of fun, especially with the headphones on as you can almost imagine you are in the drivers' seat. The shifter was easy to hook up using usb to the pc and was not hard to bolt up with a number of fitting options on my TR8 Pro Rig, and I only had to modify one hole to accommodate the fitting of it. I bought the extended arm, but probably didn't need to because it looked too short in the photos but actually would have been okay. I love the feel of the metal knob, and everything about it feels like it was made to a high quality. Good value for your money.

I don't think one needs to get the TR160 unless you are going full on motion sim. The TR120 (or probably even the TR80) is plenty solid. Got the 120 coz the 80 was out of stock. I was upgrading from a Playseat Evo and man, what an upgrade it is. I had upgraded from a Logitech G920 to a Fanatech GT DD Pro 8NM + club sport load cell pedals. Didn't know I needed anything other than the Playseat Evo till I got the Fanatech gear coz that thing flexes the Playseat frame badly.

If you already own a Playseat Evo, I'm happy to also report that the seat from the Playseat, mounts directly on to the provided slider rails of the TR120, so you don't need to buy an additional seat to fit the TR120 if you don't want to. The general footprint of the TR120 compared to the Playseat is slightly (about 5 inches per side) wider but the length is identical (I'm 6'.1", so the Playseat was stretched out a bit). It's also very heavy. The steel pedal mount plate assembly alone weights as much as the entire Playseat Evo frame without the seat! So if you intend to move this beast regularly by yourself after assembly, you will need to get the caster wheels separately.

If one of the joys of your life is sim racing, and you intend to go down the high torque, direct drive wheel base + load cell pedals path, save up and get one of these. If you are a casual sim racer who is more than happy with the likes of a Logitech G27,29,920, etc, and don't intend to go down the high torque wheel base path, then don't bother with this. It's way too overkill and something like the Playseat is more than enough for you :) 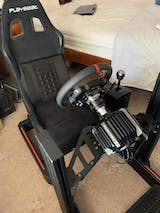 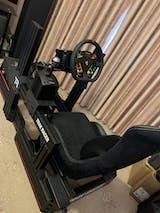 This unit compared to another competitor represents much better value. You definitely need to take your time and read ahead in the manual. Aside from being a few washers short here and there everything seemed to be in order. Zero flex in the unit using a direct drive wheelbase. Happy. Solid with no flex
This cockpit from Next Level Racing is solid and capable of handling the latest direct drive wheel bases. The only slight flex I noticed was from the reclining seat but it is minimal and not noticeable when racing. Im using this for GT7 (PS5) and Asseto Corsa (PC) and absolutely love it. Took a while to assemble correctly and to get all the controls where i wanted them, but the process was overall quite easy and mounts my Fanatec wheel perfectly. Very happy with the purchase, especially adding some rubber castor wheels to allow moving it around. Mounted a OMP racing seat and used the pedal mount components in a different way to intended by NLR to achieve my desired seating position.

This. Is the real deal
I went all in on building a replacing rig. Actually got two of them including the motion platform v3 and monitor stands. My wife isn�t as happy as I am :-). I have it set up so you can race against the other side by side. The rig is super well built with solid steel beams. The bolts go in perfectly and everything lines up. No need to torque and pull to get it to fit. It took me about 2 hours per unit to put together along with the motion platform and monitor stand. I also went with Logitech for steering and pedals and the butt kicker for seat vibration. One seat arrived with a tear. They responded to me in less than 8 hours and replaced it. Great customer support. If you add the motion platform the configuration is quite expensive but as my Dad says, if your going to be a bear, be a grizzly! That didn�t work with my wife, however.

This is my first DD wheel so I can't compare it to anything else. Easy to set up and configure. Plenty of force, and a small form factor made it easy to install. The GT4 wheel is very comfortable, loads of buttons and switches. The shifters and clutch paddles are great. No discernible play in the quick release at all. I'd absolutely recommend the Alpha Mini and GT4 wheel. The brake on this pedal set is absolutely unbelievable. Exactly the same feeling you get in a real car� It�s changed the game of how good a brake pedal can be in sim racing�

� All I�m missing really, is the G-force, and then it would feel exactly like the real thing. Great customer experience
Ordered GT track cockpit and had some issues with shipping, the team were very good with communication & understanding and helped me get sorted. The GT track itself is great and even better immersion than I expected for my flight sim cockpit. Highly recommend to anyone wanting to go to that next level of simming! Would definitely use them again for simulation products

They really have been able to improve my lap times�

The overall performance of these pedals is up there with the best of them at the moment. If you were to buy these pedals, you will definitely not be disappointed.

Only had it up and running for a short time so still trying to dial it in to my liking, once dialed in I think it will be one of the best buys I have made

only take one day . this shifter is already in my home. the best shifter i ever have.

� For me as a serious sim racer where speed is important, would I spend 1200 EUR of
my hard-earning money on this pedal set? Absolutely!

Asetek is setting new standards when it comes to hydraulic brakes. There are currently no comparable products in this price range from competitors who recreate the brake 1:1, as is the case in real racing.

At this point, I have to say that I can no longer recommend load-cell pedals in the price range from 600 EUR upwards. Asetek makes load-cell solutions in high price ranges obsolete in my eyes, as hard as this may sound.

These are definitely the nicest pedals, I have ever used. Hands down!�

Everything from the build quality, to the way they feel, to their functionality, adjustability. And the effort that�s gone into the research and development into making these feel as close to real-life race pedals that you find in race cars�

For me, this is probably the best pedal set that I have used so far. I will leave it on the rig. I don�t know what I could change on it�

I�m having great fun with them on my rig. I�d be super happy if I just own them forever and never had to put another set of pedals on there�

� I will tell you, hand on heart, I think it�s worth it. I really think they�re worth it.

Have being using this ButtKicker for a few months now & it is amazing. Really add that bit more realism to the game that you need. Wither it’s filling the bumps of the runway as you take off in MSFS2020 or XPlane or the rumble strip as you race round Dirt Rally. This device just gives you that seat of the pants feel you need. One of the best addon I have bought for my sim setup. If you are in two minds to buy. Just buy this you won’t regret it one bit. Plus buying form GamerGearDirect you can’t go wrong.

A
Next Level Racing GTSeat Add On Andy A.

It was needed.
After upgrading my brakes I found that getting a fixed seat was mandatory. I was a little concerned about the reclining feature that it would give as per the review on Sim Racing Garage but his review was with the motion platform, which I don't have so I can't say how that would be. Like it is, for me, it's a solid, comfortable and nice looking addition to my DD stand. great purchase
You get what you pay for, well packed, well laid out, easy to assemble, adjustable in every aspect, easy to move around, comfortable driving position. Works for my 7 yr old right up to a 6' adult great buy

Super send!
The SF1000 handlebar is by far the best and most beautiful handlebar I've ever had. Design is sleek, very handy and can be used on PC, PS and Xbox. You have to press the buttons well, so you can't quickly push a button accidentally while racing. Lots of screen options for different race types (F1/GT). Price-quality is really great, mega good replica!

Note that you do have to update the firmware of both the steering wheel and your wheel base via PC. These must both be up to date otherwise your steering wheel will not work properly. raced fantastic, but installation a crime
Installation was a hell of a job, but then enjoy